Europe is, by convention, considered to be one of the world’s seven continents. Comprising the westernmost peninsula of Eurasia, Europe is generally divided from Asia to its east by the water divide of the Ural Mountains, the Ural River, the Caspian Sea, the Caucasus region (specification of borders) and the Black Sea to the southeast.[2] 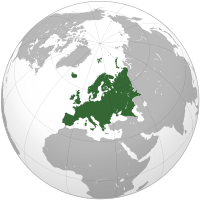 Europe is bordered by the Arctic Ocean and other bodies of water to the north, the Atlantic Ocean to the west, the Mediterranean Sea to the south, and the Black Sea and connected waterways to the southeast. Yet the borders for Europe—a concept dating back to classical antiquity—are somewhat arbitrary, as the term continent can refer to a cultural and political distinction or a physiographic one.

All Copyright reserved to wikipedia.